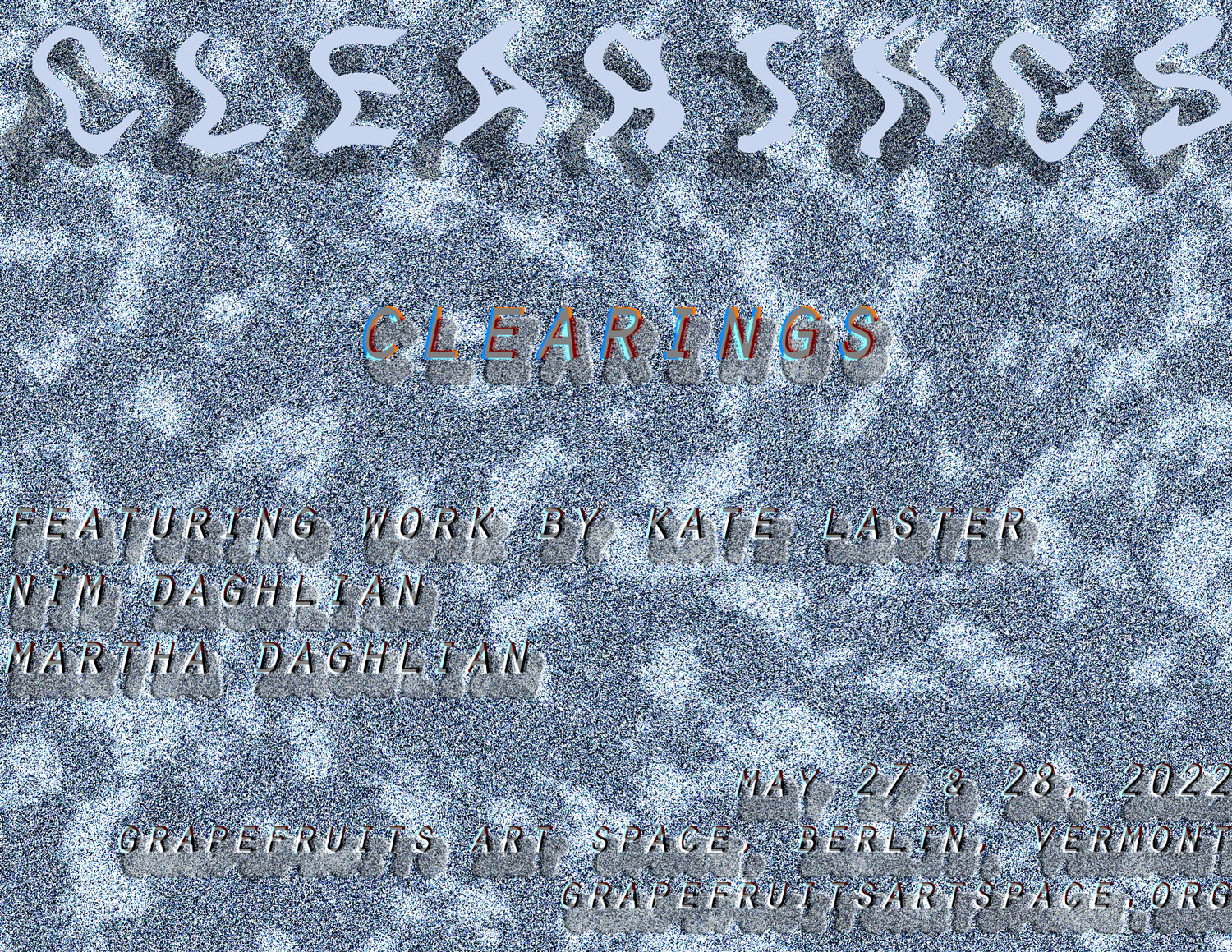 grapefruits art space is proud to announce clearings, the first show in our new location on a wooded lot in central vermont. this two-day installation features works on paper and in textiles by kate laster, ním daghlian, and martha daghlian. a clearing in the woods seems to tell you something about where you are, but only in relation to the unknown that surrounds it. what can be learned from deep observation of a tiny fragment of earth? what kinds of signs and messages can help to guide you through an unfamiliar landscape? what does the clearing look like from the woods?

kate laster’s cut-paper works respond to crisis and catastrophe with language that offers grounding and space. in clearings, her durable, declarative laminated texts merge with the natural environment, allowing light to shine through them and rain to wash over them. in her words, “i make weatherproof papercuts in times of crisis and surrender and determination. my text drifts during constant crisis, processing performative emergency. i trace and alter the roles of stenographers, torch singers, crisis actors & myself, a witness— to put this another way: does the most catastrophic event seem possible to tread or even describe? how can our diasporic nature rest without language to communicate violence under generational trauma, zionism, capitalist agendas and a boiling planet?”

ním daghlian’s small scale watercolor paintings depict some of the creatures who share grapefruits art space – a newt, a trillium flower, a frog. each painting is mounted on a post, evoking trail signs traditionally meant to inform humans about the non-human world around them. but rather than attempt to name, identify, or lay claim to things we may not fully understand, these delicate renderings are content to sit with their subjects, respecting their otherness. ním says of his painting practice, “the deeper question isn’t ‘how do we understand intense things’ but ‘how do we even understand one thing?’… and part of me has always wanted to just paint one thing in the frame. not just to focus on it, but to feel the vibration between some thing being there, and then the there in which it is being.”

martha daghlian’s soft sculptures and patchworked tapestries combine and remix processed and glitched images from art history. her works interact with their surroundings, blurring the lines between frame and image, self and other, natural and supernatural, in an attempt to destabilize the notion of a fixed perspective. in her writing about this work, martha says, “instead of getting tangled up in trying to free perception and representation from language, i propose that one can build a web, using filaments of text and strands of culture, that twists old stories into new meanings. by fixing unexpected points of connection into nodes that bend the past but do not rewrite it, i hope that the nets, nests, portals, and frames i make can offer ways to think about delicate tension that allows such an abundance of subjectivities to exist and interact within and across timelines.”